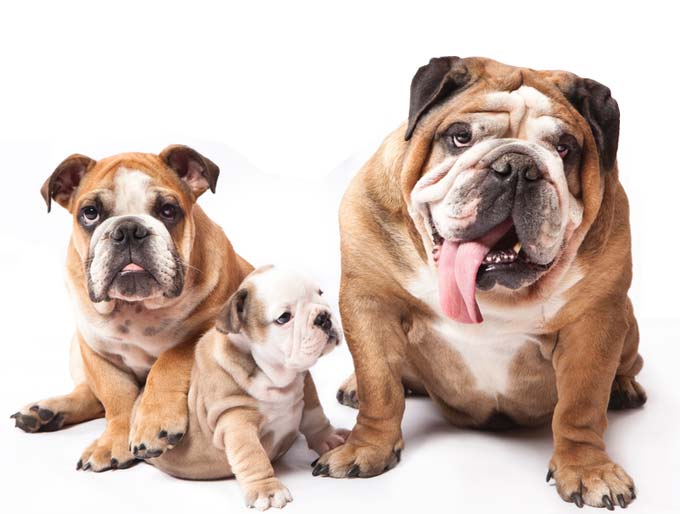 The English bulldog stirs up mixed feelings in the dog community. Some people consider them to be the ugliest dogs in the species, while others think they are the most beautiful.

One thing is for certain, they are a paradox of a breed. They have one of the most brutal histories of the species but they have the most adorable and photogenic faces too.

They have also become symbols of tenaciousness and toughness, and nations, organizations, and individuals all over the world use the image of the bulldog to reflect this characterization in their project, products, etc.

So what makes the English bulldog so intriguing? Here is a little bit about the history of this breed that may shed some light on the subject.

The bulldog’s colorful history begins with their name. In the past, they were used to guard, control, and bait bulls. In addition to being considered a sport, people in the middle ages believed that bulls must be baited prior to being slaughtered. Supposedly, this made their meat more tender and nutritious. Butchers that sold non-baited bull meat would be penalized and no one would buy their products.

Their past as bull baiters and dog fighters contributed much to their personality. Bulldogs are tough and persistent. They rarely whine, bark or otherwise complain. When a bulldog does any of these things, then you know there is a problem. For this reason, a bulldog needs an owner who is very attentive and will check on their pet frequently to make sure he is doing alright.

While tenacious, the bulldog is incredibly patient. They are good-natured and trustworthy, so much so that they are good for families with children. Bulldogs will patiently tolerate the poking, prodding, and teasing of children without becoming upset. This isn’t to say that bulldogs should be treated like babysitters. Like any other dog breed, they have their moments and young children shouldn’t be left unsupervised with them.

It takes about 36 months for bulldogs to mature physically. Mentally and emotionally, they remain puppies, especially when it comes to chewing. This is a serious problem with bulldogs. Some outgrow the habit after two years but the vast majority doesn’t. The best way to deal with this issue is to train the dog to chew on approved dog toys; otherwise, you’ll be dealing with destroyed shoes, furniture, and other objects for as long as your canine companion lives with you.

Other breed challenges include sensitivity to changes in temperature, heat-related breathing problems, short life spans, and difficulty whelping due to their unique physique.

Though sometimes clumsy, bulldogs are capable of astonishing feats of athleticism. They are a friendly breed, but don’t hesitate when it comes to protecting their home and family. In addition to their intimidating stature, bulldogs will attack if necessary to prevent harm to those they love. They can move very quickly, albeit for very short distances, and have a way of throwing their body weight around that will send any intruder to the ground.

About the Bulldog Breed


Despite what is shown in the media, English bulldogs are not lazy canines that only want to sleep all day. Some may be that way, but the vast majority enjoys exercising and is relatively healthy. However, they are prone to illnesses that affect other breeds of dogs including: hip dysplasia, dermatitis, elongated soft palate, allergies, heart problems, demodetic mange, and small tracheas.

If you are adopting an older bulldog, then these problems will typically have already been diagnosed by the time you are ready to make him or her part of your family. Those looking to buy or adopt puppies can avoid getting dogs with serious health problems by only working with a reputable breeder.

Avoid buying bulldogs from pet stores, breeders who sell to pet stores, or backyard breeders. More often than not, these dogs come from or a part of puppy mills. Also, do not get a dog younger than 8 weeks old. The dog needs this time with the mother and his siblings for health and socialization. If a breeder is willing to give a less than 8 week old dog to you, walk away from the sale.